The OS has been available to developers for a while now, anyone can download this version and try it out. Apple has said that this is a beta version it has quite a few bugs yet to be worked out.

The user can install this on a secondary device if you really want to try it out.

Some new features In IOS 9 are apple letting user to run two apps in side by side windows and allowing your device to go into a low power state, hence you to gain an extra hour of battery life.

The new special app called “Move to iOS” that you can download on your Android phone which then securely transfers all your photos, contacts, messages, bookmarks, mail accounts, calendars and wallpapers.

The internet giant Google had launched Nexus 10 in India. Google Nexus 10 has display resolution of 2560x1600p and pixel density of 299ppi.

It comes with Android 4.3 (Jelly Bean) os will get the latest Android 4.4 update. It has dual-core 1.7GHz processor with 2GB RAM and 9,000mAh battery.

The Nexus 10 tablet has a 5MP rear camera and 1.9MP front camera.

Micromax Canvas Tab P650 has is a 5MP rear camera and sports a 2MP shooter camera in front. This tablet works on Wi-Fi as well as 3G networks and comes with voice calling facility. Canvas Tab P650 tablet is Powered by a 4,800mAh battery, it offers five hours of browsing time on 3G.

iBall Edu-Slide tablet comes with 8GB of inbuilt storage which can be expanded up to 32GB via microSD card. The tablet sports an 8-megapixel rear camera and a VGA front-facing camera. This tablet is comes with a huge 8000mAH battery.

The new technology innovation Notion Ink company is going to launch the Tab Adam II next month, with a unique design that has two displays.

Notion Ink’s spokeperson told to the NextBigWhat that the design of the tablet will be a huge talking point, just like the Adam. We will have a very unique design with two displays

Today Specifications have saturated now. Adding more cores doesn’t mean noting nowadays. The main focus this time is on the design of the device as compared to specifications.

Asus has announced the Nexus 7 tablet in India. The Nexus 7 tablet comes with Android Jellybean operating system. It has Nvidia Tegra 3 processor with 1 Gb RAM. It comes with HD video playback and Nexus 7 3G version and Wi-Fi version also available at different cost. It can be used upto 10 hours of Web browsing or e-reading. It has up to 300 hours of standby time.

The tablet also features 8GB of built-in storage, of which 5GB will be user available. There is also external memory compatible microSD expandability up to 32GB supported. 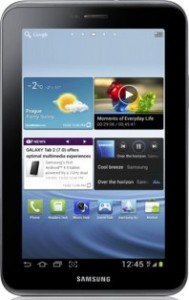 It comes with a dual core 2X ARM Cortex A9 cpu that uses the ARMv7 instruction set.

It has primary camera at the back is of 3.15 Megapixels but no LED flash and secondary front camera 0.31 MP.