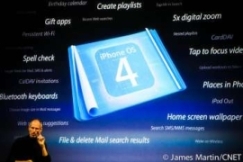 Apple’s iPhone 4.0 willl be released out in this summer. It is expected that it will bring many long-awaited features to the platform.

Apple’s App Store has thousands and thousands of applications sorted in lots of categories. By this new Features iPhone developers and users will finally be able to switch back and forth between applications without having to shut down the app entirely to enter the new one. Now iPhone 4.0 users will be able to create folders like Games and drag and drop apps into those folders which simplify the home screen.

By this new OS Voice-over-Internet-Protocol applications like Skype could be run in the background. Like the VoIP apps, navigation apps and others apps will be able to run in the background while doing other things with the iPhone. The new OS adds Unified inboxes and organize-by-thread features are coming to the iPhone. With this new Apple’s iPhone 4.0 the OS-level integration will be expand the creative possibilities.