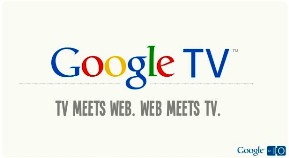 The Search Engine gaint Google has announced the details about Google TV. Google claimed that the Google TV is a new platform that will blend TV and the internet into a seamless entertainment experience. Google TV system will also include an open-source platform that will enable developers to create widgets for the system. Google has also signed up a raft of content partners for Google TV to offer premium programmes and web services. Web content partners include the New York Times Co, Pandora Media Inc and Amazon.com Inc’s. NBC will provide CNBC Real-Time, an application that combines stock information and financial news. HBO will contribute a service called HBO GO, which lets users access shows on-demand. It provides a new way to sell advertising, which makes up most of revenue.

Google TV uses the web browser Google Chrome and enable the users to search through web, watch videos, Flash-based games and applications and other unlimited funs. Google TV include opening up the living rooms and enable new innovation from content creators, programmers, developers and advertisers. It is based on Android operating system and co-developed by Google, Intel, Sony and Logitech.