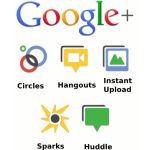 Google+ will also be available as a desktop application and as a mobile application but only on Android os. Google’s biggest attempt to rival the social network Facebook, which had over 750 million users in 2011.

Sparks delivers a feed of highly contagious content from across the Internet. Google+ people already use real-life circles to express themselves, and to share with precisely the right folks.

Google+ Hangout allows up to 10 people to video chat together.