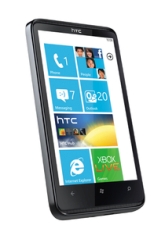 The HTC HD7 device is powered by 1 GHz Qualcomm processor. It lets the users to open and edit MS office documents. Additionally, users can also manage their corporate accounts as well with the device using Outlook.

There are speakers either side of the HD7’s screen. When you’re watching movies on the go The 5MP camera on the back is a little more tech-heavy than its brothers, offering a dual-LED flash that can also be used as a video light when capturing HD video at 720p. Entertainment lovers will find the handset a treat for device being compatible to Xbox Live and Zune with both the features respectively

The thin strip of glass at the bottom that holds the touch sensitive buttons. It give the impression of a small netbook in your pocket.