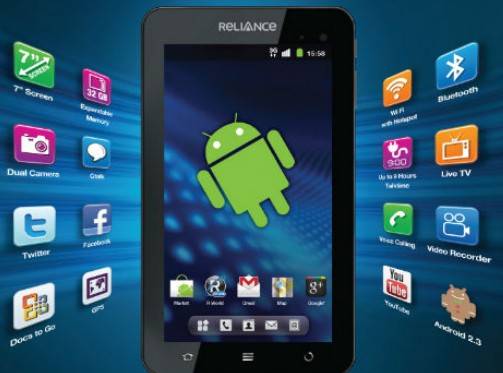 The Reliance 3G Tab is a custom-made device manufactured by the Chinese company ZTE. It provides high-end features
The tablet weighs around 389 gm making it neither too light nor too heavy.

Reliance 3G Tab is equipped with features such as MS Documents on the go, Mobile TV, Voice calling, GPS and video recording. Reliance provides user-friendly email on the go. Additional features such as enhanced social networking, video streaming, gaming etc will be available.

The launch of Reliance 3G Tab a fully loaded tablet at an aggressive price at 12,999, it seems a Jackpot for india users.

Reliance 3G Tab is equipped with a :

Pros and cons of Samsung’s B7722 dual SIM touchscreen phone