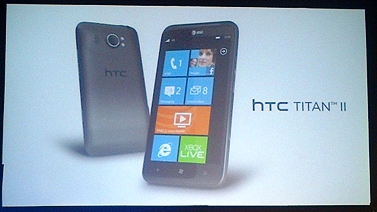 HTC the smartphone maker to launch its world’s first 4G LTE Windows Phone, which contains the highest-megapixel smartphone camera 16MP. Titan II is covered everywhere with a soft-touch finish of a lighter gray.

It has 4.7-inch Super LCD display, which nicely showcases the clean and simple Windows Phone interface. It has 1.3-megapixel camera on the front

In addition to the camera boost, the Titan II has a larger battery,1730mAh. HTC Titan II is lot more comfortable in the hand.