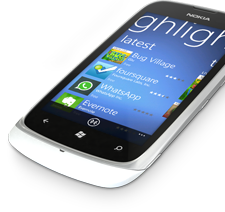 Nokia had introduced Windows Phone Lumia 610 to a new generation of smartphone users. The phone features a 3.7 inch TFT capacitive touchscreen display with a resolution of 800 x 480 pixels. Weighing approximately 131gm. It is designed to appeal to a more youthful audience purchasing their first smartphone. It provides access to 100,000 applications, Xbox Live, Nokia Music, Nokia Drive, etc.
Users can use the phone as a WiFi Hotspot for as many as 5 WiFi-enabled devices.The company had come up with a limited edition Dark Knight Rises Nokia Lumia phone.