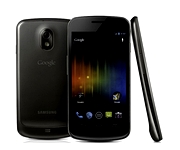 Samsung Galaxy Nexus is compatible with the Near Field Communication technology.